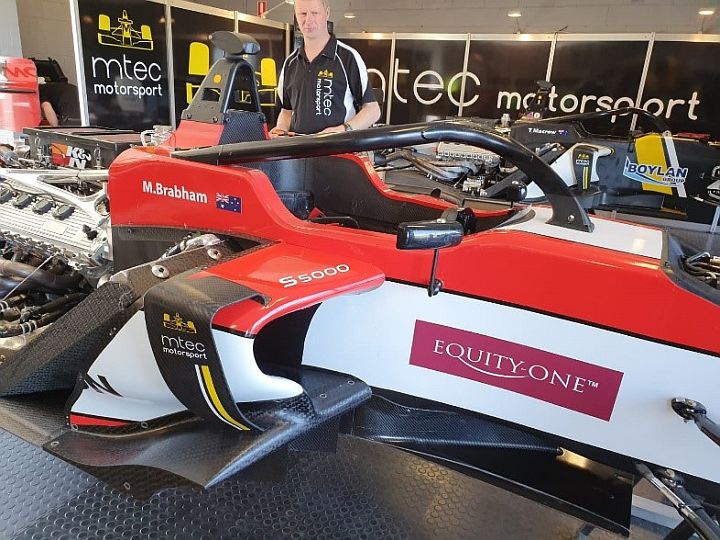 Equity-One is excited to announce its support for young Australian talent, getting behind rising star Tim Macrow.

Tim and the MTEC Motorsport Team will compete in The Australian S5000 Championship, a new open-wheel racing series created by the merger of the Formula Thunder 5000 and Super5000 series.

Three-time Australian Formula 3 series winner Tim Macrow will compete in the inaugural S5000 round in the car which has been used in development of the new open-wheeler category.
In conjunction with Macrow’s announcement as an MTEC Motorsport driver for Round 1 of the first ever S5000 season at Sandown, it has been confirmed that MTEC will also field Indianapolis 500 starter Matt Brabham.

In that role, he helped to develop the category’s gearbox, which has been made by one of his backers for next weekend in Holinger Engineering.

“Having done a few laps along the way in the development car, I do know the thrill that awaits all the drivers lining up at Sandown,” said Macrow.

“It’s going to be a red-letter day for Australian motorsport, and I’ll be giving it a red hot go, as someone once said.

“It’s really great that a group of companies linked to Australian motorsport – Equity-One, Holinger, and the Boylan Group – have stepped forward to support my entry.

“I’ve obviously worked with everyone at Holinger as the S5000 car has evolved, so am particularly honoured to be carrying their colours.

“Running alongside Matt (Brabham) will be interesting. While he hasn’t run open-wheelers for a year or two, don’t forget he was USF2000 champion a few years back, and ran very strongly in Indy Lights, and then his one-off Aussie-backed entry in the 2016 Indy 500.

Team owner Bruin Beasley already has ties to GRM as the head of its TCR Australia program, a position which he will retain alongside his new commitments in S5000.“MTEC is an open wheel organisation, so this is an opportunity to do something special, historic in the local scene,” said Beasley.

“Personally, I’m committed to running GRM’s TCR program, however, I’ll have a crew of my regular crew, made up of local and international staff, that will look after the two cars at our usual high standards.
“I’m a big fan of the S5000 concept, but we need to get through this year and then see what will happen for 2020 and beyond. It is certainly something that we are looking at closely as a full-time category to be involved in.

“With these two drivers, we have a really good shot at getting some good results at Sandown. Tim has done plenty of laps, and Matt is no stranger to high-powered open wheelers.”

Macrow brings the number of confirmed starters at Sandown to six, off the back of the recent announcement of current SuperUtes competitor Tom Alexander and the first named driver, 11-time Formula 1 grand prix winner Rubens Barrichello.

The inaugural round takes place at the Sandown Shannons Nationals meeting from September 20-22, with television broadcasts and live stream coverage on Speedcafe.com on the Saturday and Sunday.

Equity-One wish Tim and the MTEC team every success.